Heavy Hitter DJ Eddie One is the mixshow coordinator at KXOL Latino 96.3 FM and can be heard on the air Monday through Friday 8pm-10pm on one of the highest rated mixshows in Los Angeles. In this capacity, Eddie One is able to reconnect to his Latino roots by speaking Spanglish on the air and playing Latin driven music, in addition to maintaining his presence in the Hip Hop & Top 40 world by going from Daddy Yankee to 50 Cent, from Don Omar to The Game, from Ciara to Ivy Queen, in the mix. He also holds down a daily Hip Hop radio show at Sirius Satellite Radio’s Hot Jamz Channel 50 Monday-Friday 7pm pacific, and aspires to be a radio program director at a major radio station someday. He is also currently making TV appearances as host for Es Musica a Mobile Media TV Channel for Go TV Networks, and official DJ on Descontrol a weekly Video TV show airing saturdays at 1pm on the nationwide Telemundo network.

DJ Eddie One was a fan of the Felli Fel myspace page we designed. We originally had a top design with a collage of different things and places that Eddie likes (sample show below). We designed a section for his upcoming show and all his promotion posters to be posted. This page also has the fan “copy and paste” free layout and a wallpaper download, its part of our “FREE DOWNLOAD” add-on section. DJ Eddie One’s Free layout is also available at http://yourfreelayout.com/dj-eddie-one-layout 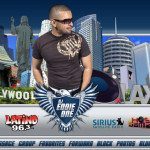